The Global Game Jam 2020 happened at the end of January and this year’s topic was “Repair”. Taking inspiration from said topic, we had 48 hours to develop a videogame. 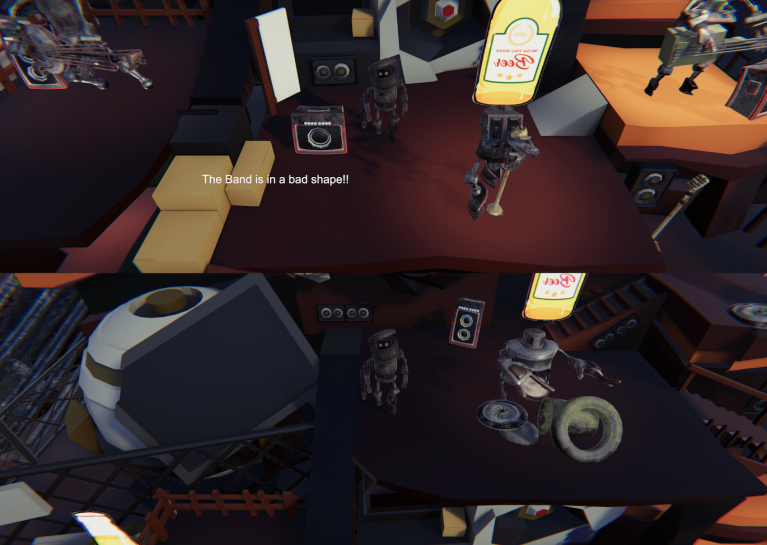 I was lucky that I found a team of talented designers and programmers who were interested in creating a game that explores interactive music not just for emphasis, but as a core gameplay mechanic. The game’s working title is Roadie Simulator and the demo can be downloaded from the project page on the GGJ website.

Basically, the player is a roadie for a rock band and needs to make sure that the band is in good shape, or else the fans get angry and it’s Game Over. Oh, and all characters are robots, because robots are cool!
I composed and produced two 2-minute songs (one song per level) for our band of robots and broke the music down into individual stems for the instruments. Apart from the “good” stems, every instrument gets a bunch of alternative “bad” stems that are either out of tune, out of sync, distorted or anything else that could go wrong during a performance. Using an interactive music technique known as vertical remixing, all those stems can be mixed in various combinations to create anything from a perfect performance of the song (should the band be in good shape) to a total trainwreck. It is up to the roadie to bring the band members what they need to stay in good shape (tuners, new amps, beer etc.), or else the sound is not pretty!

I had so much fun composing songs for a robot band! As you can imagine, not much sleep was had. We didn‘t have enough time to build the 2nd level in the 48 hour Jam, so only my first song got included in the above demo. If only I had known earlier, I could have slept instead of staying up all night to record the second song, haha!

Either way, I think both songs turned out pretty cool and I plan to release them as singles sometime soon!

This website uses cookies to improve your experience while you navigate through the website. Out of these, the cookies that are categorized as necessary are stored on your browser as they are essential for the working of basic functionalities of the website. We also use third-party cookies that help us analyze and understand how you use this website. These cookies will be stored in your browser only with your consent. You also have the option to opt-out of these cookies. But opting out of some of these cookies may affect your browsing experience.
Necessary Always Enabled
Necessary cookies are absolutely essential for the website to function properly. This category only includes cookies that ensures basic functionalities and security features of the website. These cookies do not store any personal information.
Non-necessary
Any cookies that may not be particularly necessary for the website to function and is used specifically to collect user personal data via analytics, ads, other embedded contents are termed as non-necessary cookies. It is mandatory to procure user consent prior to running these cookies on your website.
SAVE & ACCEPT